Every time we present our products Riablo, Kari e Back in Action we always come to explain what is hidden inside those strange and small boxes that are worn on the various parts of the body and that magically measure the patient’s movements: they are the inertial sensors, better known also as IMU (Inertial Measurement Unit).

To put it in a nutshell and understandable by everyone, inertial sensors are objects that allow you to measure angles in space and, by combining measurements together, to measure joint angles or joints. By connecting the sensors to the body with elastic bands and sending the data via Bluetooth to a laptop or tablet, CoRehab software reconstructs the user’s movements with extreme precision, giving the effect of magic and extreme simplicity that makes our so useful products for those who use them. But let’s go in order and try to explain what lies behind those strange boxes called IMUs.

In principle, the technology behind the IMUs was mainly used in the aeronautical and naval sector and still allows, thanks to measurement elements such as accelerometers and gyroscopes, to control and correct the three angular pitching, rolling and yawing accelerations. Now, inertial sensors can also be found in cars, particularly in electronic stability control systems, better known as ESP.

“A modern inertial sensor is composed of three measurement units: a 3D accelerometer, a 3D gyroscope and a 3D magnetometer. “

Let’s try to know these objects more closely and to understand how they can be used today in movement analysis and in rehabilitation with great effectiveness. In this way it will also be clearer to understand what comes from that kind of magic at the base of our company and our products.

The accelerometer is a measurement sensor that allows to know the orientation in space with respect to the earth’s gravity of the object in which it is positioned. To understand how an accelerometer works, just think of a cube with an iron ball in it. By orientating the cube in a different way, the ball will push on one or more faces precisely because of the force of gravity. Imagine naming three adjacent faces of the cube with X, Y, Z and the opposite lores with -X, -Y and -Z (just like the Cartesian axes). If the ball is resting only on one face, suppose the face -Z as in the figure, we could say that all the force of gravity weighs on that face, while it does not weigh on X and Y. By rotating the cube, the ball will also move to the its interior due to the attraction of the gravitational field and the components on the various faces will change.

If you can electronically read the force impressed on each of the faces, you can also know the orientation of the cube (or the object that contains it) in the space with respect to the force of gravity.

The gyroscope is a different sensor that measures angular velocity thanks to a much more complex device that does not depend strictly on the earth’s gravity; for this reason, sophisticated gyroscopes are also used in space travel to know mechanically if the spaceship is maintaining the assigned route in the absence of reference points, journeys in which a deviation of a few tenths of a degree to millions of kilometers away can wanting to say a huge mistake. The gyroscope principle is based on the law of conservation of the angular momentum, which is already too complicated for the purpose of this article and which we leave to those who want to deepen it further. Basically, when an inertial sensor moves and rotates, the gyroscope lets us know how much it has rotated with simple mathematical calculations. In essence, the gyroscope is used to measure angular velocities and therefore also angular displacements. 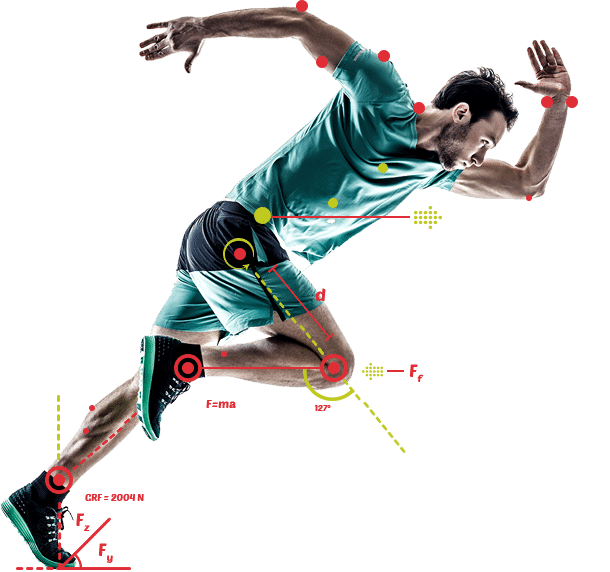 Finally the magnetometer, or compass, perhaps the simplest to tell but also the one that gives more headaches to those who use it. The magnetometer is in fact a sensor that measures the intensity of the earth’s magnetic field and how far it moves away from the magnetic north, with the problem that if there are magnetic or simply metallic masses near the sensor, the sensor will also be attracted by those, providing some incorrect measurements.

In reality, mathematics helps those of us in CoRehab who want to use inertial sensors to do body movement analysis. By combining these three sensors with some particularly sophisticated algorithms (filters), it is possible to obtain a very accurate orientation of the object in space and that, on the contrary, the orientation self-corrects itself as it is measured. Some of the inertial sensors on the market provide very accurate measurements of their orientation, expressed in quaternions, a strange mathematical object that allows measurement errors to be minimized in the calculation of orientation in space.

In short, as far as angular measurements are concerned, very accurate information can be obtained with a good knowledge of the subject.

At CoRehab we immediately put ourselves to the test and asked an institution of movement analysis, Engineer Leardini and his laboratory at the Rizzoli Orthopedic Institute, to compare our measurements with their gold standard during some human movements. Result? An almost perfect overlap between our measurements with devices for a few hundred euros and extremely expensive equipment, as evidenced by the important publication of engineer Leardini and his team.

The CoRehab sensors are then coupled to interactive software that allows those who use them to have accurate and real-time information on their movement, allowing for instantaneous fundamental corrections in any rehabilitation process, as happens in Riablo or Kari.

However, the inertial sensor cannot easily be used to calculate displacements or distances, because to obtain distances expressed in mm or cm from angular movements or accelerations, gross errors are obtained, or, as we say in jargon, the measurements are derived.

But we, despite this, have ventured into measuring jumps or analyzing the walk with our sensors with excellent results, but we’ll talk about this another time.

“We hope that now those magic boxes, which some call electrodes, other GPS or simply “things”, take on a clearer meaning. “

END_OF_DOCUMENT_TOKEN_TO_BE_REPLACED

A new phase for CoRehab

A new phase begins for CoRehab, with the founders David Tacconi and Roberto Tomasi purchasing the shares from the majority shareholder to relaunch the company

END_OF_DOCUMENT_TOKEN_TO_BE_REPLACED

How we create excellent products